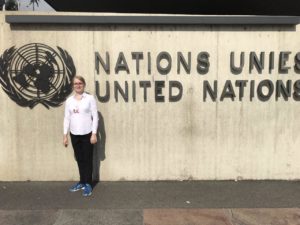 Among many questions raised during the session were the following: gender inequality, legislation concerning domestic violence towards women, the “foreign agent legislation”, rise of poverty and corruption, the situation concerning vulnerable groups of population such as people with disabilities, sex-workers, people who use drugs, indigenous peoples, LGBT.
After considering these and other questions in detail, the Committee gave a number of recommendations on improving the situation in Russia. We are very pleased to report that they also include the recommendations on the rights of transgender people.

“The Committee recommends that the State party <…> put in place a quick, transparent and accessible procedure of legal gender recognition, to facilitate the enjoyment of the Covenant rights by transgender persons.“

The Committee also urged Russia to adopt anti-discrimination legislation that protects LGBT-community and to repeal or amend all legislation, including Federal Law No. 135 (also known as “gay propaganda law”), that could result in discrimination, prosecution and punishment of people because of their sexual orientation or gender identity.
During the session the Committee members heard the position of the official Russian delegation on these matters and held a meeting with non-governmental organizations’ members, including Transgender Legal Defense Project.
Our information and monitoring coodinator Diana Kurdyash (photo) provided data about issues with legal gender recognition, access to health care and discrimination against transgender persons in Russia.

She commented on the session and the concluding observations of the Committee:

“It was important for me to speak on behalf of the Russian transgender community during the CESCR session, because I believe the community, its specific needs and its expectations to be under-represented.
Being a transgender person myself, I was able to speak for the community and I saw that our voice was heard by the committee members and through their questions – by the Russian delegation.
Although the Russian Federation representatives largely ignored all of the questions that were asked by the Committee members about transgender issues, they did notice them and they cannot keep ignoring them forever. They were reminded that transgender people exist in Russia and I find that an achievement in itself. I believe it is extremely important that the needs of Russian transgender community are recognized by the UN.
I am very grateful to the Committee members for their recommendations and I sincerely hope that the Russian government will follow them”.

We also would like to recall that earlier the Russian Ministry of Health published a draft of the order to develop a new form of a medical certificate confirming “sex change”. The certificate and the procedure of receiving it already raise a lot of concerns among transgender people, activists, lawyers and medical specialists working with transgender people.

“The UN Committee on Economic, Social and Cultural Rights directly recommended Russia to adopt a quick, transparent and accessible procedure of legal gender recognition. This event coincided with news about Ministry of Health developing a new form of a medical certificate confirming sex change. Such a form was absent in Russia for many years, which created a lot of obstacles for transgender people wishing to have the gender marker in their documents changed. However, after examining the Ministry of Health’s draft in detail, it becomes clear that, unfortunately, it does not meet the requirements of swiftness, transparency and accessibility. For example, it requires a period of 1,5 years of psychiatric evaluation to take place before receiving a medical certificate about “sexual reorientation”. Obviously, the specified period of 1,5 years is excessive and such a requirement is not based on anything. There are also other serious concerns.

Transgender Legal Defense Project expresses its deep gratitude to the Committee members for their important recommendations. We also hope that Russia will take these recommendations into account and will make the appropriate amendments to the Ministry of Health’s draft.”

Full CESCR list of concluding recommendations may be found HERE.